How To Turn A Farm Table to A Plank Table

Did you recently see a well loved mini van pulled over on the side of the Highway, a woman in skirt and heels, risking life and limb to pick up a filthy pile of wood planks?  Did you think “that woman is nuts”, or that poor woman, “look a load of wood fell out of her minivan and she has nice clothes on, and now has to get all dirty to pick them up”. ……Well, that woman was moi!
I found the planks through a hot tip I had received from a friend and client.  Email comes in, just prior to running my car pool to dance, “pile of wood planks off Hwy 4″, on gravel, enough room to pull over and pick up”.  My heart started beating like I was gearing up for a race.  You never know, someone might find that “treasure” before you.  When I get the tips, I have to be ready to run!  No matter what I have on!

I love the table the way it was, but I could not get the look of having a rustic plank topped table out of my head, and of course, I can never leave anything alone that can always be a “redoux”.  I was literally going to stop at Home Depot after I dropped off my car pool to PAY for planks, then give them a banged up, rustic look and cut them to fit my table top.
This is table before, read about it here in “Free To Me”
Instead, I got banged up, filthy, old, wear worn planks for free.  Trust me, it wasn’t easy getting them.  They were long, muddy, and some had some gnarly nails and splinters.  One kind man even pulled over to help me, thinking the entire pile had fallen out of my car.  When I explained what I was doing, he looked at me like I was a crazy lady, but continued to help anyhow.
This is what they looked like, diamonds in the rough….. 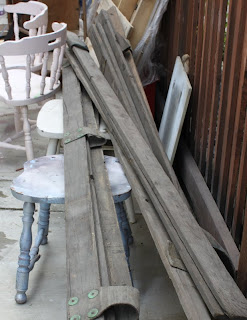 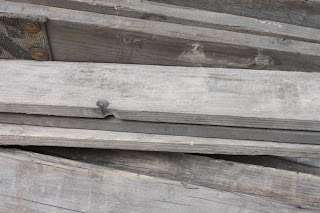 Once I got them home, I separated the good from the bad.  Got to work, pulling out nails where I could.  Then I put little boy labor to work.  Scrubbing with a ton of TSP, power washing, and repeat, about 5 times.  I thought I had picked up a bunch of 2 x 4’s.  Once we got all the dirt off, we realized they were really 1 x 4’s.  Perfect. 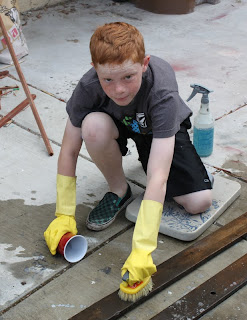 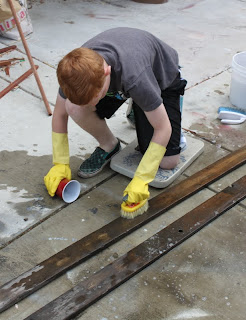 Next, I sanded the heck out of them.  Who knows where these boards had been, but trust me, they had not been treated kindly.  Lots of dings, rough patches, and knots.  After much sanding, they were ready for assemblage.  I laid them out like a puzzle on my table top, moving them around until I found the best fit for each piece and they were snugly together.  I then used several Wood Screws and bolted it to the existing table top.  After they were secure, I used a reciprocating saw to roughly cut each end off, leaving about 6 extra inches overhang from the existing table.
I could have done this before I secured them, but I wanted to see how they looked before I cut.  I purposely did a rough cut because I liked the rustic look.  Once they were secured, I sanded the edges and applied three coats of outdoor Polyurethane to make sure the top stayed as waterproof as possible. Now I have perfect Farm Table to Plank Table!
Yesterday marked the official beginning of BBQ season.  It was a complete joy to eat at our “new” table, sit on our new “chools” and enjoy the fruits of our labors. 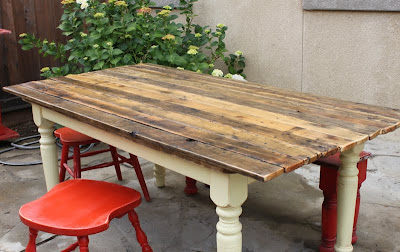 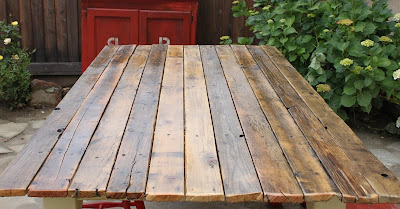 I love the natural “character” that has evolved over the years these boards have been around, who knows where!  But I could never have reproduced this kind of look from store bought planks. 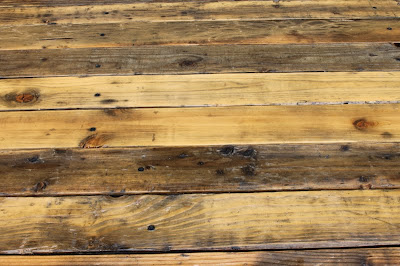 Next time you see someone pulling junk into their car on the side of the road, wave at me and say “Bon Jour!”
Hope you are inspired to convert your old Farm Table to a Plank Table! 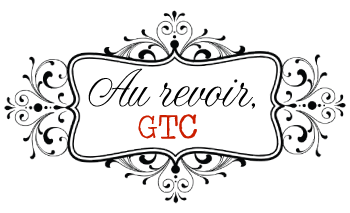